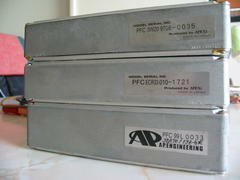 1.Q: Do you provide telephone-based support?
2.Q: I'm still having problems. Help me.
3.Q: How do I connect up a WBO2 controller to the FC-HAKO?
4.Q: Which WBO2 controller does the FC-HAKO work with? Which one do you recommend?
5.Q: My FC-HAKO does not work or stopped working!
6.Q: Does the FC-HAKO support connecting the hand controller at the same time as a laptop?
7.Q: Is any software provided with FC-HAKO?
8.Q: Do you provide support for the tuning software?
9.Q: I want a simple tool to check the communications with the PowerFC. Is there one available?
10.Q: I have tried Copilot, it somewhat works, but it always does a soft-reset. What gives?
11.Q: How does this compare to the datalogit hardware interface?
12.Q: I have seen some other cable solutions from Japan. Are they any good?
13.Q: What's the difference between FC-HAKO and Kashima's communication adapter?
14.Q: FC-HAKO does not work with a specific PowerFC that I have. What gives?

1.Q: Do you provide telephone-based support?

1.A: No. However, email support is provided as part of purchasing FC-HAKO.

3.A: Since firmware v1.06, FC-HAKO supports and recommends differential input mode only. For more information, please read the FC-HAKO WBo2 Installation and Setup Guide as each wideband controller has different number of outputs, different out names, and different wiring colour! Do NOT CONNECT any signal or +5V wires to ground / black wire of FC-HAKO. Doing so will render FC-HAKO useless and will VOID WARRANTY.


4.Q: Which WBO2 controller does the FC-HAKO work with? Which one do you recommend?

The best choice for WBo2 controller is the Innovate LC-1, together with optional gauge.


5.Q: My FC-HAKO does not work or stopped working!

5.A: Number one thing to remember is not to spend 10 hours figuring out the problem _then_ emailing for assistance. It is also best to take a don't-think-you're-smarter-than-the-problem approach, otherwise the problem will always win.

The main thing to do is to:
• download the FC-HAKO debug tool and run it in "test" mode. This will show whether communications works.
• send the output to sales at fc-hako.com so analysis can be performed.

In the mean time:
• Check if tuning software is NOT set to auto-detect COM port (Setup => Port).
• Check Device Manager under the 'Ports (COM & LPT)' subtree. There should be a device called 'Prolific USB-to-Serial Comm Port (COM#)'.
• Check that no other software is running that is taking over the COM port.
• Check if the mini-DIN (PS/2-like) plug to the FC-HAKO is firmly in place, aswell as to the PowerFC.
• Make sure the DB9 connector is tightly screwed in.
• Make sure you do NOT pull on the "PS/2" cable, but rather hold the "PS/2" connector to remove it.
• Disconnect and reconnect the USB cable to power cycle the FC-HAKO.
• If all else fails, email us with what you did and did not do, then follow directions exactly and verbosely to isolate the problem.


6.Q: Does the FC-HAKO support connecting the hand controller at the same time as a laptop?

6.A: No. This is not a supported nor designed feature. Please have a read what PaulR33 has to say here.


7.Q: Is any software provided with FC-HAKO?

7.A: NO software is provided or included - only the hardware interface is supplied. FC-HAKO has been designed to work with official and third party software, as well as anyone who would like to write their own software.


8.Q: Do you provide support for the tuning software?

8.A: We do provide support and attempt to best answer your questions. For very specific tuning questions, they should be directed to the forums:
• Copilot by Kevin Beane.
• FC-Tune by Andre Buenger. (fasthatch)
• FC-Edit newcelica.org tuning guide.


9.Q: I want a simple tool to check the communications with the PowerFC. Is there one available?

9.A: Steps:
• Download FC-HAKO-debug.exe.
• Connect FC-HAKO to the car and the PC. Start IGN.
• Run FC-HAKO-debug.exe COMX test, where COMX is the USB port (serial port) you have connected the FC-HAKO.
• The debug tool sends 10 commands to the PowerFC then repeats the process by sending each command 32 times.
Each dot represents success. Any other character represents failure.


10.Q: I have tried Copilot, it somewhat works, but it always does a soft-reset. What gives?

10.A: Verify that your PowerFC version string (exact) is listed as supported. If not, CoPilot will always default to AFM-based engines. If you happen to have a MAP-based engine, Copilot will continuously fail with a soft-reset. This is NOT caused by FC-HAKO.


11.Q: How does this compare to the datalogit hardware interface?


12.Q: I have seen some other cable solutions ( yahoo jp cables and PFCLinker ) from Japan. Are they any good?

12.A: It depends if you are happy with the following limitations:
• comes without professional case. For example, PFCLinker3.
• requires the use of an extension cable, due to larger-than-required connector plug.
• it is more expensive than the FC-HAKO.
• it supports only X001-based Power FCs.
• it supports only FC-Pro software.
• it does not have analog (ADC) input.


13.Q: What's the difference between FC-HAKO and Kashima's communication adapter?

13.A: Kashima's hardware is a perfect drop-in replacement of Power Excel hardware as it supports 4 analog inputs, including exhaust temperature input (with signal amplification and adjustment) which is used by FC-Pro. But there are a couple of negatives, and that is it only works with FC-Pro software, plus the package is costly (~500-750 AUD). FC-HAKO will work with FC-Pro but you will not be able to utilise 4 analog inputs. FC-HAKO will also work with third party software, which is lacking from Kashima's hardware interface.


14.Q: FC-HAKO does not work with a specific PowerFC that I have. What gives?

14.A: Apexi, back in the old days, first introduced PowerFC without supporting connection to a computer. This explains why later 1996-1998 PowerFCs have "FC-Pro" stickers on them, to show that they worked with official software, and the ones without "FC-Pro" stickers, did not work with software.